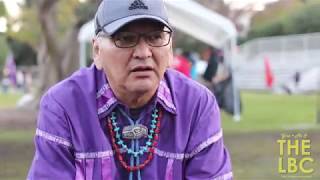 Did you know that before California State University, Long Beach, before The Pike, and even before Rancho Los Alamitos Historic Ranch & Gardens, Long Beach was home to an ancient Native American village and burial ground? Explore the early history of Long Beach in this week's You, Me and the LBC episode. #history #nativeamericans #youmeandthelbc
0 comments
Paul Slater

Shoot Your Shot with Dan Gooch at The Annex

We sat down with Long Beach Century Club member and sports history buff Dan Gooch at the Annex to chat about the sports figures of Long Beach’s past (13:39-52:53). In 'Iron Sharpens Iron' we talked the Wilson girls’ water polo CIF-SS championship and Long Beach State’s 22nd ranked softball team (3:21-8:40). Hipster clothes and people in elevators have been pissing us off lately in 'Grind My Gears' (8:45-12:55). Our newest segment ‘Fun Facts’ taught us some cool things about o
0 comments
Claudine Burnett

No one knows exactly how Valentine’s Day began, but what would it be without a kiss between lovers? Well, folks Long Beach was faced with that possibility when in 1918 Long Beach became a kiss-less beach. To keep Long Beach a nice moral town city officials passed an ordinance prohibiting caressing, hugging, fondling, embracing, kissing or wrestling on the beach and at the Pike. The law also prohibited a person from resting his or her head on another person’s lap. If you broke
0 comments
Claudine Burnett

It was almost like Romeo and Juliet, fifteen-year-old Jennie Thomson of Duarte thought as she eloped with twenty-four year-old Homer Norman. Her father thought her too young for romance and did not mince words when telling her so, but she was in love and wanted to spend her life with Homer. The elopement had been well planned. Homer had taken off with Jenny in one carriage and, accompanied by four young friends in another, headed to Long Beach. Long Beach, they thought, would
0 comments
Claudine Burnett

Stories of Love Remembered What would Valentine’s Day be like without stories of love? Tales of romance around Long Beach. Let me share a few tales from the past with you. "Lost Love Found" It was a story that brought many a tear to the eyes of many Los Angeles Herald readers the morning of August 28, 1898. It appeared that Leslie Newlin, one of the crew of the on the yacht Dawn, had found a long lost wife and she a long lost husband. Five years earlier Leslie was first offic
0 comments
Gary Metzker

Park Estates Boundaries: Pacific Coast Highway and Clark Avenue, Atherton Street and Bellflower Boulevard Tract 14673 was initially laid out for single-family homes along Anaheim Road, but a deal was made between Lloyd Whaley and the brand new Los Angeles-Orange County State College in early 1949 that turned the focus on building mostly apartments instead. Though the new college campus was to be developed on land donated by the Bixby-Bryant family east of Bellflower Boulevar
0 comments
Sylvana Uribe

Burcham Elementary School 5610 E Monlaco Rd, Long Beach, CA 90808 David Burcham has been credited for the strong moral fiber that ran through Long Beach Polytechnic High School for many decades. Burcham dedicated 34 years to the “home of scholars and champions” as its principal from 1907 to 1941. He earned the nickname “Daddy” because his word was taken as law and he was a leader during many years that were challenged by local and national events. Burcham saw his communi
0 comments
Claudine Burnett

Tabernacle - 3rd Street and Locust In Long Beach, New Year’s Eve has always been a popular time to celebrate. One hundred twenty years ago Long Beach festively greeted the New Year with ringing bells, singing songs and tooting horns at a party held at the Tabernacle. The Tabernacle, the major building for city events, was decked out by women of the city with a banner in bright red letters made of flowers which read “Welcome 1898.” Music, songs, recitations were all part of th
0 comments
Jonathan Murrietta

A pioneer Long Beach resident named Elvia Bartow Astle, the daughter of a prominent hotel owner named J.V. Bartow, proposed many of the street names in the center of town to the City Council in the early 1900s. She loved trees, so naturally that’s why we have an Elm, Locust, Pine, Cedar and Chestnut streets. When Elvia was in her nineties she could still be seen painting the city views from the sunroom of her ocean front property on Ocean Boulevard. Barbara Britton Britton Th
0 comments
Paul Slater, Gary Metzker, Jennifer Newton

Other Notable Landmarks in Long Beach

Joan Van Blom Bridge By Paul Slater Pacific Coast Highway at the Los Cerritos Channel Legendary Olympic rower Joan Van Blom, who passed away in August of 2015, was an icon in her sport and will never be forgotten by the city of Long Beach. In March of this year, the two-time Olympic silver medalist was honored for her triumphs on and off the water, as the bridge that covers the channel along Pacific Coast Highway next to the Marina Pacifica shopping center, now bears her name
0 comments
Jonathan Murrietta

Drake Park 951 Main Ave, Long Beach, CA 90813 Drake Park, located west of Maine Avenue, is named after another Civil War veteran, Col. Charles R. Drake. Col. Drake was the proprietor of the Old Virginia Hotel in Long Beach and the president of the Long Beach Amusement Company. Additionally, he played a major role in bringing the Pacific Electric Company to Long Beach in 1902 and opening the old bathhouse in Belmont Shore. Drake moved to California to make investments in Lon
0 comments
Gary Metzker

Bixby Hill Bixby Hill is a gated community located across the street on the east side of California State University, Long Beach. The majority of these homes were built 1966 to 1973 and feature large one to two-story single-family dwellings. More importantly, it is home to Rancho Los Alamitos, which at 7.5 acres is a rare vestige of the original 300,000-acre Los Coyotes land concession given to Manuel Nieto in 1790 for his service on the Gaspar de Portolá expedition to Califo
0 comments
Emily Ayers

Earl Daugherty is the aviator credited for establishing the first inland airfield in Long Beach Before it was called the Long Beach Municipal Airport, it was known solely as Daugherty Field. Named in honor of Earl S. Daugherty, a pioneering aviator from Long Beach, it became the first municipal airport to serve Southern California, preceding Los Angeles Airport by more than three years. Daugherty was born in 1887 in Des Moines, Iowa. He moved to Long Beach in 1902 with hi
0 comments
Emily Ayers &amp; Jennifer Newton

Building Neighborhoods Into Communities Through Libraries

Lloyd Whaley’s Los Altos Neighborhood Library 5614 E. Britton Dr, Long Beach, CA 90815 Lloyd Whaley had a vision. It was much larger than a massive master-planned community aimed at expanding Long Beach to the east. It was about creating a place for families to come together, neighbors to converse and the residents of Los Altos to grow roots. Lloyd knew that community didn’t just come in a housing tract. It came from the gathering centers within it. So he made sure that hi
0 comments
Paul Slater

Blair Field: Named for the man who saw it's potential

4700 Deukmajian Drive, Long Beach, CA 90804 The nostalgia surrounding Blair Field is second to none and it’s hard not to get the chills when stepping foot in its hallowed grounds. Although its history is somewhat of a mystery, it’s been one of the most prized baseball facilities in the United States. Before 1958, youth baseball stars played ball at a practical baseball field at Recreation Park on the corner of Seventh Street and Park Avenue. It was dusty and ordinary, which
0 comments
Jennifer Newton

The Many Names of That State College in Long Beach

What’s in a name? Well, for California State University, Long Beach the question is more accurately – What is your name? Throughout the University’s 68-year history, it has had no less than five official names, one interim name and one name that only the athletics program uses. Sheesh. No wonder the campus is having a bit of an identity crisis. Let’s take a look at the history of the many names of that-state-college-in-Long-Beach. 1949: Los Angeles-Orange County State Colle
0 comments
Sylvana Uribe

Pioneers of Local Education and the Names Behind our Local Schools

Picking a name for a school is no easy venture, in particular when so many seek to have their chance at shaping history. Names are chosen in hopes that the schools will reflect their namesakes’ characteristics and move toward the future with the same fervor those people had in their lifetimes. Long Beach Schools are no exception. Let’s take a further look into the names behind East Long Beach’s schools! Minnie Gant Gant Elementary School 1854 N Britton Dr, Long Beach, CA 90
0 comments